Yesterday I had a case that to me perfectly encapsulates the current state of dog training in the US.

I’d been called to help a herding breed mix with serious leash-aggression. This beautiful two-year-old who was sweet and cuddly with humans would viciously lunge, snarl, whine, bark, and generally freak out at the mere sight of a dog a few blocks away. This made walking stressful and difficult for the owners, so outings would be infrequent, brief, and entail lots of dodging behind cars and crossing to the other side of the street. It also made going to the offleash dog park impossible, as the owners were understandably afraid she’d rip another dog apart if given the chance.

The family had seen two trainers before me.

The first had them carry hot dogs along on the walk, and try to distract and treat the dog at the first sign of any reactivity. This is one version of the so-called “purely positive” approach, by far the most common training method currently used by professional trainers. I know the trainer my clients used; she is well-respected, certified by the largest certification body in America. Yet the owners found little to no success with this method. The trainer told them that the dog would probably be like this for the rest of her life.

The second trainer put a shock collar on the dog, and electrically zapped her every time she started to react. This sometimes succeeded in stopping the barking and lunging, instead creating a terrified yelp of pain. But other times it only intensified the frenzy. I know this trainer personally, also. I spend many of my sessions fixing behavior problems that he’s helped create. 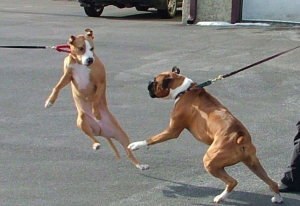 The owners were for obvious reasons skeptical about anyone’s being able to help, when they contacted me. But they were devoted to exhausting every possibility in trying to help their pup become happier, more peaceful, and social.

The moment I walked out their front door with all three of them, we ran into another dog – and passed calmly, on loose leash, working “lie down” right there on the sidewalk. Within five minutes we’d had two successful meet-and-greets with other dogs, sniffing nose to butt. We continued in this way for over an hour, passing dogs calmly, meeting and sniffing and saying hi to others, then concluded the session by stopping at two different dog parks and watching their dog socialize peacefully with other dogs offleash for the first time in her life.

It was a beautiful thing. It always is.

The owners were excellent and excited students. We practiced communicating boundaries to the dog audibly, visually, and physically. We discussed what kind of collar and leash to use, how to walk with a calm consistent energy, and how best to introduce one dog to another. The Mom realized she’d been following her dog down the street and in life generally, not only physically but emotionally as well. The Dad had an “A-ha!” moment when he began using the leash as a means of communication, instead of simply for restraint.

The near future will be a learning curve for the whole family: each day the owners will be practicing their calm leadership techniques, and the dog will be learning how to be social. But there’s been a shift. Each day from hereon will be filled with more and more calm and happy social interactions, and, most importantly, with hope.

I’ve witnessed this same situation, in every variety of forms, day in and day out, for years. Sometimes several of this exact type of session in a single day. And though I am so busy, and so needed, I’m anything but happy about it. It saddens me.

I’m sad first of all for the dogs. So many dogs are kept pent-up and frustrated physically, socially, and emotionally, simply because nobody has shown the owners some simple tools and techniques. The right collar; the right leash; good ways of walking, of feeding, of socializing, and of working obedience exercises.

I’m sad also for the owners. For so many families, an activity as simple as walking the dog is a constant source of stress. They end up throwing away huge sums of money on harnesses, fancy leashes, holistic supplements, medications, and ineffective trainers. They get less exercise, their friends visit less, and their lives are bent out of shape trying to contain their dangerous dog. Yet at the same time they love their dog to the ends of the earth, and the thought of giving him up is more devastating than any of the chaos he creates.

Ultimately I’m angry at the current society of professional trainers, including professional publications and certifying organizations. You can’t blame everyday owners for leaving their dogs in crazed states of mind, when the vast majority of canine professionals steer them in an unhelpful direction. There’s too much in-fighting among trainers, too much selfish concern over getting more business, and ultimately too much emotionally charged rhetoric spent lambasting opposing training methods. The “purely positive” camp excoriates corrective trainers as being cruel, inhumane, and ignoring positive rewards. And this is far too often true. Very few trainers know how to communicate calm and gentle corrections by various subtle auto, visual, and physical means. They resort instead to prong collars and high-intensity shock collars; and using these on the dog I saw yesterday  is like trying to teach a child table manners by bashing him in the head with a bat. But trainers who use corrections are and always will remain in demand, since purely positive training is as useless for anything beyond basic obedience commands as is trying to raise a well-mannered child without ever telling him “No” or “Stop doing that.”

Canine professionals need to put aside their selfishness and rhetoric, and evaluate objectively and honestly which techniques most immediately and permanently help dogs become calm, peaceful, social, and truly fulfilled. Not just for the sake of the millions of dogs who need help, but also for their loving owners who are struggling to help them. If I could wave a magic wand and make all trainers capable of giving the owners I saw yesterday the tools I gave them – or entirely different tools, that do the job even better! – or better still, if I could magically make all owners into calm, confident leaders who don’t need to hire a trainer in the first place – I’d do it in a second. I wouldn’t think twice about shutting my doors and giving up every penny of my business if it meant so many dogs and owners could live happier lives.

There is, however, no magic wand. I will continue trying to spread the message, one client at a time.

And occasionally via ranting blog posts. 🙂