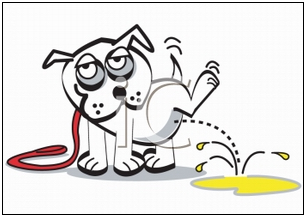 I’ve heard this a lot recently:

My dog pees/poos in the house just to get back at me! He knows he’s supposed to do it outside. He knows I hate it. He does it purposely, out of revenge! What a jerk!

It is the easiest thing in the world to get frustrated at our dogs sometimes: they are domesticated wolves, after all, who we try to fit in to our well-manicured apartments and lives. And to make the learning curve even more difficult, we don’t speak the same language that dogs do!

But anger and frustration will rarely help your dog learn to trust, respect, understand, obey, and love you. So it should help to know that dogs don’t EVER mess the house out of “revenge”, to “get back at” you, or to make you mad! This includes not only peeing and pooing, but even digging, chewing, and shredding things.

First of all, remember that DOGS LIKE pee and poo! They love the smell. It tells them everything about where dogs have been, what they’ve eaten, their physical conditions, even their moods. Smelling messes is like us reading a book or watching a movie! As I like to put it: when your dog messes in your house, if he’s doing anything at all intentional with you in mind, he’s leaving you a gift! Of course it isn’t an intentional “gift”; but the point is to try to see how one-sided our human assumptions are. We’ll never be able to live harmoniously with our dogs if we can’t learn to see the world through their eyes (and noses :).

What about the reasons people give that prove their dogs are devious and vengeful?

– “He knows he’s supposed to do it outside!”
Yes, he knows outdoors is where lots of other dogs do it, and hopefully he’s never been punished for doing it out there (and instead been rewarded). But this doesn’t mean he knows he SHOULDN’T to do it INSIDE!

– “He knows it makes me angry!”
There has been excellent recent research on “the guilty look” in dogs.  Basically, dogs know when you’re angry or upset. They can even learn that you tend to get upset when certain things are around – like pee or poo in the house. What they DON’T learn is that you’re upset that THEY MADE those things! They don’t associate themselves, their previous actions, with the product.

– “He purposely does it in the worse places!”
Dogs innately abstain from messing where they eat and sleep. When we exclude our dogs from certain areas – like our bedrooms, or living rooms with expensive oriental rugs – they’re much more likely to go mess in there when left on their own, if they have the chance. Also, if your dog is “marking” – putting his (or even her) scent on things to “claim” them, he’ll tend to do it on things that smell like you (your clothes, bed, etc.) A neat housebreaking tip is to feed your dog wherever they tend to mess – e.g. actually put the food right down on the rug itself, no bowl.

So what are the real reasons your dog still messes inside even after so much training? The three most likely causes are:

So instead of getting frustrated next time your dog messes, take him for a long walk to the dog park, and get him running and playing offleash with other dogs.

I guarantee your pup isn’t trying to “get back at you” for anything. He’s likely experiencing some combination of frustration, nerves, and pent-up needs for outdoor mental, physical, and social stimulation. Whatever the case, he certainly doesn’t expect or want to make you angry. Though sometimes he doesn’t understand why you get so angry, in his mind you guys are besties till the end!