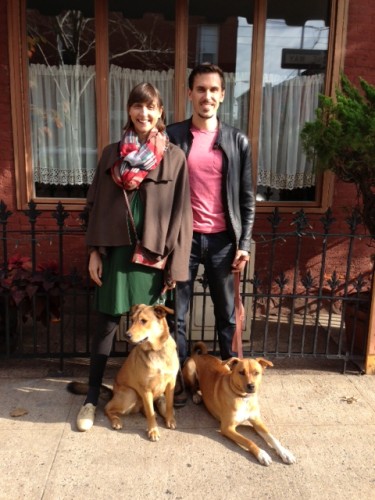 We have two 10 month old rescue puppies. Ashkii is a Shepherd mix who is very smart and attentive but leads on leash and shows aggression towards unfamiliar people/situations and occasionally when unfamiliar males enter our home. Ariel, a boxer mix, who loves to kiss everyone, is not so easily triggered but can escalate the situation by barking and wrestling with Ashkii when he is being aggressive. Both are very energetic and athletic dogs.

Anthony Newman spent the afternoon educating us and the pups this Sunday. It’s now Thursday and pups are doing great! We have increased their routine from two to three 30min+ walks/dog run play per day with lots of calming belly rubs at random places and times. They are now super relaxed while at home. Walking has improved dramatically with Ashkii’s head remaining in line with my legs on a loose leash. He hasn’t barked at anyone. We allow off-leash play at the dog run to be very energetic with play fights between each other and chase games with other new dogs.

Like other reviewers’ we read a lot on the internet but there’s nothing like seeing it in action from someone who REALLY knows dogs. It allowed us to keep our training consistent so the pups don’t get confused and has formed a stronger connection between us and our loving pups. I love Anthony’s philosophy that you should never have to avoid situations, i.e. “aggressive” play fighting off-leash or meeting new dogs and humans but instead through obedience, calm energy and reward you can condition them to interact calmly with in this crazy city we all live in.