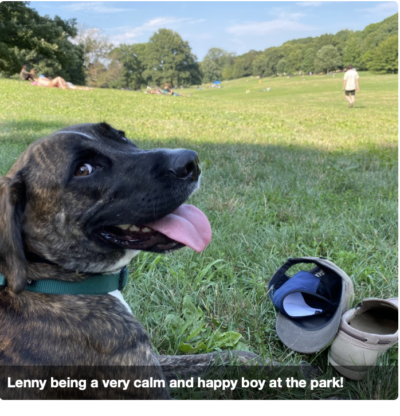 Anthony is honestly a miracle worker and true dog whisperer. I can’t recommend him enough, especially for people who have fear aggressive/reactive dogs!

I rescued my 65-lb Plott hound mix, Lenny, when he was about 9 months old, and while he for the most part was social and friendly with most people and dogs, he had some really serious aggression issues at the dog park (attacking unneutered puppies, getting into fights over balls, not understanding proper boundaries and etiquette, rough play that quickly escalated into fights, misreading social cues) and with certain humans (lunging at men in hats; growling at people with some kind of odd or exaggerated gait; becoming reactive around people who are hesitant around him; lunging at children). It was so bad and I felt extremely hopeless and distressed all the time, which I think further contributed to his issues because he could sense my anxiety. I had tried positive reinforcement methods pretty religiously for about a month or two after rescuing him with absolutely no change- in fact, using treats all the time seemed to make things worse and I noticed that he would resource guard ME and get overly protective. The biggest thing positive-only trainers say is to “control the environment” and “create distance” between your dog and the triggers but I found that extremely difficult to do in the city, especially when you have a huge puppy who needs vigorous exercise!!

Anyways then comes Anthony! As other reviewers have mentioned, within minutes he had Lenny in the palm of his hand. It was actually quite incredible to watch. He showed me how to think about various aspects of the environment as rewards in order to stop depending on treats all the time, how to walk Lenny properly without him pulling, and how to create structure in my home so that he can feel more contained and safe. Anthony also came to off-leash hours at my local park with me a couple times and showed me how to LEAD Lenny to and from other dogs, create boundaries, and just generally instill in Lenny a sense of confidence that I protect HIM, not the other way around, which made him less likely to act aggressively out of fear. The leash walking and stuff at home improved very quickly but the dog socialization stuff took more time- I have to say that at first I had difficulty implementing Anthony’s techniques, because it’s harder than he makes it look to be both calm and assertive at the same time. But with lots of practice and more sessions with him, things slowly improved, and there was a bit of a 2 steps forward 1 step back pattern. It also was just so comforting to know that while I might struggle to implement what Anthony taught me, at least I was able to see that my dog had the capacity to be obedient.

I have now had Lenny for a little over a year and I have worked with Anthony about six times for individual sessions and Lenny is basically a different dog now. It’s for sure an investment but I basically went from thinking I had to give Lenny up to literally people stopping me to compliment his good behavior! Not only did Anthony show me how to be a calm confident leader and use corrections in a thoughtful way, but he connected me to other resources that have helped Lenny so much, including Paws&Rec for super affordable pack walks that include off leash time and helping me learn to use an e-collar when I expressed interest in trying it (which has been a game changer for off-leash recall/ boundaries). Lenny is definitely not perfect- he still hates children (lol) and there is still the occasional dog or person that for some reason he just doesn’t seem to like. But hey, dogs are animals and we have to just stay alert and do the best we can with them. Anthony has endured many a panicked email or text from me over the course of the past year and he is so patient, chill, reassuring, and quick to respond in every situation, which puts me at ease and in turn benefits Lenny.

There are some people who might criticize Anthony’s methods as overly harsh or punitive- I definitely got some snarky comments when he came with me to off-leash hours- but I think they are mistaking assertiveness for aggression. Anthony encourages owners to use their bodies and voices to create boundaries and lead their dogs so that they feel safe and rewarded. I find him to be just so smart, experienced, skilled, and viscerally connected to dog behavior, and I really love that he doesn’t rigidly adhere to a particular school of thought, and instead combines techniques and approaches according to your dog’s issues. Like for example he totally uses positive reinforcement, just not in the way you might expect- instead of a constant stream of treats, he is rewarding dogs with affection, a walk, a stick, time off leash, sniffing, etc.

Sorry for the crazy long review! TLDR: I can’t recommend Anthony enough for helping you create a rewarding relationship with your dog!!