At some point during a session I normally ask owners if they ever give their dog rawhides to chew. At least half of the owners point out piles of stuffed animals and squeaky balls lying around, and say “He has loads of toys!” Other times, when we’re heading off to the dog park I ask if their dog has a favorite toy to bring along; inevitably owners grab a bag of treats. “He loves these!” they say.

Toys, treats, and chews can all be great parts of a pet dog’s life. Not only do they make dogs happy and fulfill certain needs, they also can be used to redirect bad behavior during training and turn it into good behavior. But there are important differences. 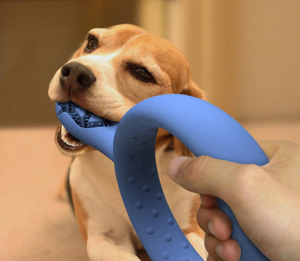 These include braided rope toys, squeaky rubber toys, stuffed animals, tennis balls, sticks, and pretty much anything your dog will play with. The main thing to remember about toys is that they are interactive. Normally a dog won’t find a toy to play with by himself for very long. (If he does, he’s probably trying to get you or another dog to join in.) There are basically three types of activity dogs do with toys: tug, fetch, and chase. Wonderfully tiring, fun, and fulfilling activities; but tug needs someone to tug against, fetch needs a thrower, and chase needs a chaser.

These are edible rewards. Dogs gobble them quickly, then they’re gone. The best use of treats is during training. For instance if you want to teach your dog a new command, saying the command and then rewarding him with a treat when he does the right thing is the best way to do it. Treating near triggering stimuli can also be used to create positive psychological associations for a dog who would otherwise be scared of things like the vacuum cleaner, cars, or other dogs. 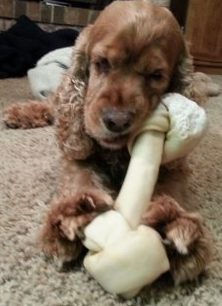 These include rawhide (chips, knotted, or compressed) as well as antlers, bully sticks, tendons, pig ears and more. These are like treats in that they don’t require interaction (your dog will enjoy them by himself) and that they’re (eventually) edible. But unlike treats they’re what I call “long” rewards: they aren’t instantly gobbled and gone. Instead, they reward and fulfill your dog over an extended period of time. Because of this, chews can be a godsend when trying to help your dog overcome psychological or behavior problems like being hyperactive, demanding, or anxious, and instead teach him to be calm, patient, and independent. While releasing and fulfilling your dog’s physical need to chew (and saving your shoes and coffee table in the process), things like bully sticks reward your dog not just for going to his bed or for lying down, but for staying in his bed and continuing to lie down, wait, and relax.

Treats, toys, and chews all have a place in your dog’s life, to fulfill, reward, and help train. Knowing the differences can help.

What are your dog’s favorite toys, treats, or chews?