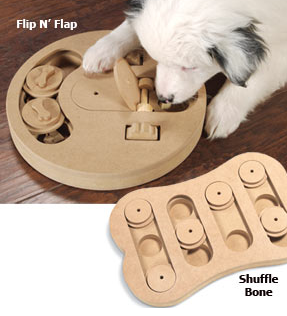 “SMART” TOYS
Have you seen or heard of these things?

They’re called “puzzle” dog toys, or “interactive” dog toys, or “smart” dog toys. The idea is you put treats in little hidden areas that the dog can only access by pawing, nosing, or nudging a flap or handle in just the right way. The idea is to keep them entertained, busy, and mentally stimulated while at home, even when you’re gone.

Lots of “bad” doggie behavior is the result of lack of mental stimulation, so I like the idea behind these things. They are undeniably both mentally and physically challenging, tiring and eventually fulfilling. But something has always worried me about them, and I finally decided to get clear about exactly what it is.

One well-known benefit of obedience training is that it builds a dog’s confidence and sense of self-reliance. Instead of seeing the world filled with frustrating obstacles blocking them from getting all the things they crave and need, they learn to relax, be calm and peaceful, and know that if they do such-and-such then such-and-such will be the result, their reward. If Daddy asks them to “Sit” and they touch their butt to the ground, they get a bellyrub and a treat. If Mommy asks them to “Heel” and they walk by her side, they get to go explore the great big world, meet other dogs, and get to the park to play. Sometimes this psycho-emotional benefit of obedience training is referred to as making a dog’s behavior “predictive”. 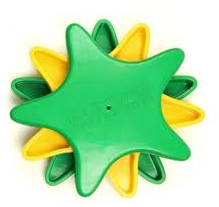 These puzzle toys seem to me to foster the exact opposite of predictive behavior! The dog is encouraged to bat and nose the thing about in as many ways as he can, until the treat suddenly pops out. To me this has always seemed just a tiny bit cruel: the dog knows the treat is in there, and digs and paws at it in frustration, until finally for some unknown reason at a random time, he’s rewarded – for what? For becoming and acting frustrated! It is law #1 of dog behavior modification, if not behavior modification in general, that behaviors and mental states that are rewarded will be reinforced.

Now maybe there are the super-smart Blue Heelers or Border Collies who have learned exactly which flaps to push or levers to slide on these toys, that do find these toys predictable and have gained not only a new skill but lots of mental stimulation plus the satisfaction of progress and success. But I’ve never seen it.

So what positive alternatives can I recommend, that avoid what I see as the problem with these “smart” toys?

If you put treats or anything bigger than kibble in a standard Kong (like in this picture), the dog experiences a little frustration getting them out. Instead, I like to fill or coat the inside of the Kong with peanut-butter or light cream cheese, and pop it in the freezer. The treat/toy lasts a long time, and there is reward with every lick. It is physically and mentally engaging, tiring, and fulfilling, but because of the constant reward not at all frustrating.

I’m also a big fan of natural rawhides, compressed rawhide, and other chew-treats like Bully Sticks, Texas Toothpicks, and the new rage natural deer antlers (they’re softer than bone but tougher than rawhide). As I’ve explained in detail before [see my post “The Great Rawhide Debate“], you have to use care when giving your dog anything that can cause esophageal or intestinal blockage. But if you supervise, experiment, and get to know your dog’s chewing tendencies and needs, rawhides and the like provide extended physical and mental stimulation while alleviating out your dog’s natural urge to chew things up (thus saving your fancy leather shoes).

If you’re around, playing a game with your dog is something you can do indoors that is both mentally and physically stimulating. “Go Find It” (as I call it) is a classic that I and my dogs love. You have them sit and stay while you go into another room and hide a treat or favorite toy (for us it’s a squeaky rubber “Cuz” toy that they seem to think is made of pure gold). Start by putting it in plain view, and later on you can stash it on a shelf, behind books, or under the couch cushions. Then you say “Go find it!” and they race off to sniff it out or spot it (sighthounds and scent-hounds can each use their own best skills). I don’t see their searching/sniffing/tracking as frustration because they know you’ve purposely hidden it – the game is interactive with you, not with a piece of plastic.

In the great scheme of things, there are lots of worse things in the world than people giving their dogs any kind of toy or treat, much less one that’s designed to be mentally stimulating. So I certainly don’t have a major beef here. But I’ve never seen this point discussed or even mentioned, that there could be non-ideal side-effects of these toys.

If you disagree or think I’m missing the point, let me know – tell me why I’m wrong! In the meantime I’m off to shake the fridge till something falls out.