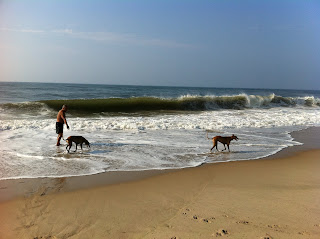 Just came back from a great weekend at the beach – ooh la la! The best part was dogs were allowed to run free offleash.

Greyhounds can’t swim, as far as I’ve ever known; but that doesn’t stop our twins from loving to lie down on the sand and let the waves wash over them! Whenever a wave is too big or strong, they leap up with a giant smile on their face as if they just narrowly escaped danger, and dash off in a giant loop around the beach.

One lady’s yellow lab – leash still attached, which tells me something – ran over in a submissive wiggly ducking crawl to say hi to the greys. Turtle, the male, barked and play-growled, then tore off to be chased. The owner came running over and grabbed her dog’s leash, dragging it away helpless as it tried in vain to get in its last few seconds of free play.

“If your dogs can’t behave, they should really be on leash!” she snarls at us.

“They’re behaving just fine!” I respond in disbelief as she disappears over the hill.

I have no desire to be rude, or start a fight. But people who can’t tell the difference between when dogs are playing and when they’re being aggressive, out of control, or fighting are a big downer in public parks. Apart from causing bad vibes all around, the worst consequence of overreactive owners is that they put a kabash on their own dogs’ fun – and often others’ as well.

For what it’s worth, here’s a list of all the things that I consider “kosher” – in fact essential – parts of most dogs’ style of play, followed by their non-kosher counterparts:

In general, the rule is that play should be “reciprocal”: you chase me, I chase you. You bark at me, I bark back. You knock me down, then I do the same to you. Anyone who tries to project human rules of etiquette into the dog park – like don’t chew on each other’s cheeks, and don’t yell at the top of your lungs in my ear, or don’t knock me down into the mud – won’t be letting their dogs get out the kind of fullfilling, animal play they want and need. Those are certainly kosher rules in the human arena; try chewing on my cheek, or knocking my niece into the mud, and you’ll see me break several rules of etiquette and probably the law as well in return. But dogs don’t mind. In fact they crave this stuff.

Finally, when your dog doesn’t get his needs fullfilled is precisely when his bad behavior WILL come out! You don’t let him wrestle at the dog park, and he’ll have no choice but to try to take out that pent up energy on you – or worse, your six-year-old son – when you get back home. And if you’ve never tried wrestling an energetic young pit bull, lab, or boxer, trust me, you won’t win. And you’ll wind up with bruises and scratches to prove it.

Relax, trust in nature, and let your dog have fun with his friends. You might have to towel him off a bit more fully when you go home. But everyone will be happier.